Stable Times at Circle: A Crypto Startup Counted Out Is Rebuilt and Riding High – CoinDesk 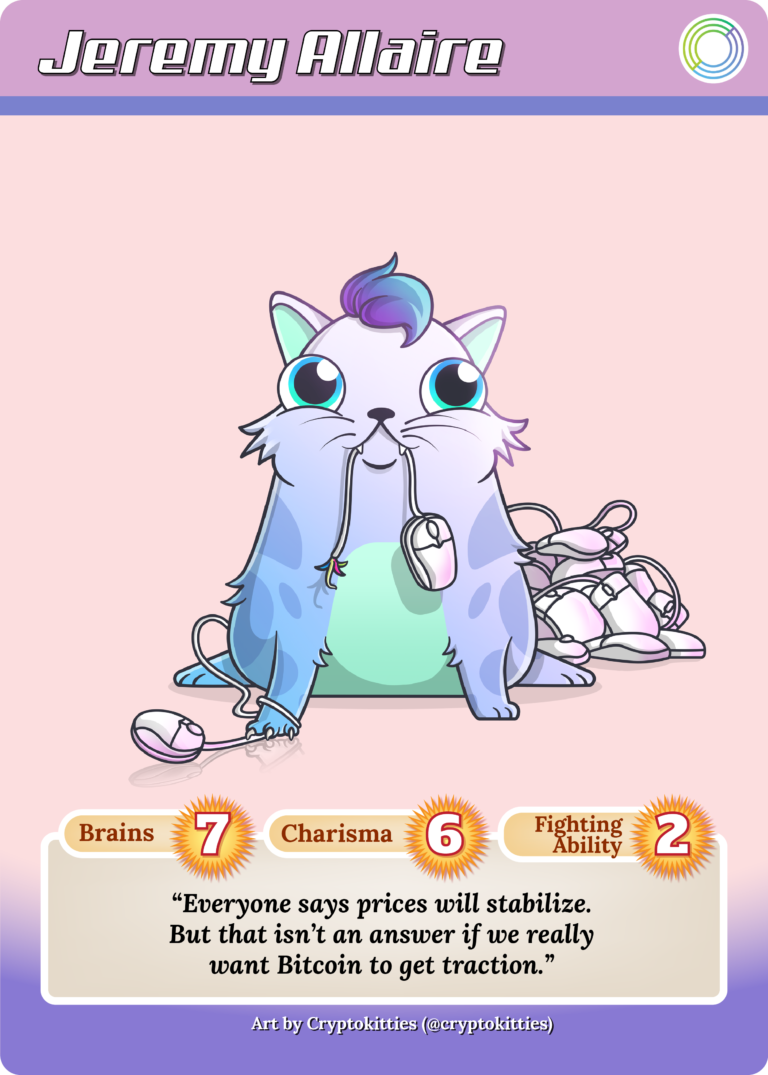 As I walked from my car to Circle’s offices in Boston on a Friday afternoon in early November, the sun appeared to have already set, even though it would be up a while longer – past 4:00 p.m.

The weather was gray, windy and cold – above freezing, but only because it was due to rain biblically for the entire drive back to New York. If a bright orange parking ticket wasn’t already fluttering on my windshield, it would be soon. Oh, and bitcoin was down two-thirds from its peak less than a year beforehand, with further to fall.

Of course, one doesn’t weather a crash like 2014 – or 2008 or 2001, for that matter (Circle, founded in 2013, is not Allaire’s first rodeo) – without a bit of “bear market? what bear market” swagger. But there may be more than that to Allaire’s insistence that “the bubble deflates, but you actually have brought an enormous amount of capital and talent into the space, and innovation continues.”

Despite being a year of decline for the crypto sector as a whole, 2018 was a banner year for Circle.

In February the company acquired Poloniex, a troubled exchange whose reputation Circle is working hard to rehabilitate, for a reported $400 million. The following month it launched Circle Invest, a product that allows users to buy and sell 12 (at the time of writing) of the most well-known cryptocurrencies.

In May Bitmain, the China-based crypto mining hardware manufacturer, led a $110 million Series E investment in Circle, which valued the company at nearly $3 billion. At the same time, Circle announced that it would issue a dollar-linked stablecoin, USDC, to compete with the beleaguered incumbent, Tether.

Circle began issuing USDC in September, and Coinbase joined the Circle-led initiative behind the coin, Centre, the following month.

And finally, also in October, Circle signed a deal to acquire SeedInvest, a platform that lets companies raise equity from retail investors through crowdfunding, using an exemption from the 2012 Jobs Act.

Nothing about raising boatloads of money or jumping into multiple lines of business guarantees success, of course. ConsenSys, an ethereum-focused startup and incubator that recently announced layoffs and a strategy overhaul, is a cautionary tale in this sense.

But Circle has already been chastened by a long retrenchment, unlike the un-wintered ethereum ecosystem. In 2017, the year retail piled into crypto and seemingly every media outlet on the planet stoked the mania, Circle was mostly MIA – if a bit less so than most people realize. Meanwhile, Coinbase ate its lunch.

In 2018, however, Circle got back in the game. And if its timing meant a missed opportunity in the Year of FOMO (to be fair, Circle was still “meaningfully profitable” in 2017), that’s OK. Allaire has a longer timeline in mind: “it’s probably going to take 10 to 20 years to realize all these ideas,” he said, “but in the end, it literally can change the world.”

And by that, he means, “you could reconstruct the whole financial system on top of this.”

Almost exactly five years before I spoke to Neville and Allaire, Circle entered the world with a bang. The company’s $9 million Series A was the largest ever for a bitcoin company (this was before there was any “crypto” to speak of outside of bitcoin).

Allaire had just moved from CEO to chairman at his latest venture, the video platform Brightcove, and his goal with Circle was “making bitcoin extremely easy for consumers and merchants to adopt.”

That would prove easier said than done. The dream of merchant adoption faded, but Circle persevered. It completed a hard slog towards regulatory compliance, becoming the first company to win a BitLicense from New York state’s notoriously finicky Department of Financial Services.

It also won approval from British regulators, which allowed users of its flagship payments app, Circle Pay, to send money between the U.S. and Britain using bitcoin as a bridge. But as with merchant adoption, bitcoin’s promise of basically free, basically instant cross-border payments also proved illusory.

Meanwhile, Venmo was doing very well without any blockchain, thank you. And a focus on bitcoin – that first, clunky implementation of the “underlying technology” blockchain, in the emerging narrative – well, that was just quaint.

Allaire and Neville appear to have agreed. “You can find all kinds of stuff about us saying things that were critical of bitcoin,” Allaire told me recently, referring back to 2016. “That the developers weren’t moving, that innovation had stagnated, that a lot of the ideas that were important in this ecosystem weren’t happening.”

By mid-2016, Allaire was downplaying bitcoin’s role in Circle’s mission, saying the firm “was not positioned as a bitcoin thing, it was [about] making money work.”

“We tried to define the product around instant money,” he told CoinDesk at the time, “and underneath it was bitcoin.” 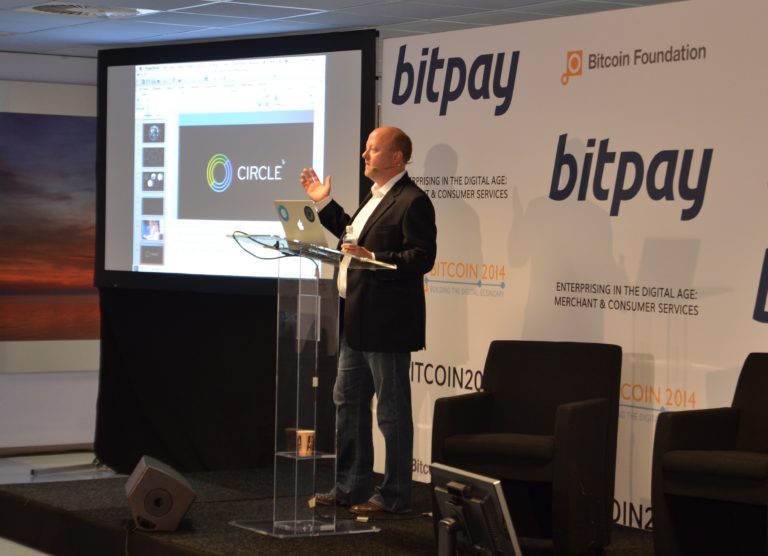 And then at the end of that year, bitcoin went from underneath to more underneath. In December 2016 Circle removed the ability for customers to buy and sell bitcoin, and to send it to other bitcoin addresses, using Circle Pay (customers who held bitcoin could still keep it in the app or convert it to fiat without charge).

That left the way open for Coinbase to take full advantage of a hype cycle that was – though few at the time could have guessed it – only six months away.

When I spoke to him in November, though, Allaire stood by the “heresy” that bitcoin had stalled out, arguing that “now everyone sort of acknowledges that it was all true.” Of course, he allowed, “there are still maximalists.”

Yet that’s not the whole story. Circle did not abandon bitcoin. For one, cross-border payments on the Circle Pay app still used bitcoin, by way of a hazily defined new technology Circle spoke about at the time, called Spark.

More importantly, though, at least in retrospect, Circle maintained the trading operation it had built to power Circle Pay.

“So while we turned off for a period of time the ability for the average retail individual person to be able to access and get bitcoin using Circle’s consumer product,” he said, “we were actually one of the biggest and still remain one of the biggest buyers, sellers, traders and market makers in the world, not just bitcoin but in all the major digital assets.” 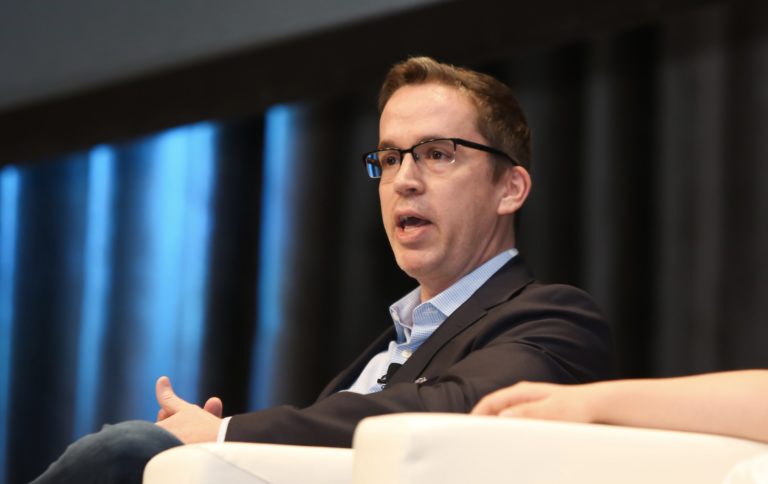 Despite its radio silence, in other words, Circle did not really miss out on the crypto boom.

And in a way, the out-of-control growth the industry experienced in 2017 provided Circle with rare opportunities to rebuild its crypto offerings.

First, one of its trading desk’s biggest customers was looking for help. Poloniex, a Boston-based exchange created by altcoin miner Tristan D’Agosta, hit – as Allaire put it – “a lot of the constraints that happen when a business grows really, really fast.”

In 2017, as token projects were proliferating and customers were flocking to the exchange, the relatively small team at Poloniex was having trouble keeping up on multiple fronts: operations (maintaining crypto wallets, for example), regulation (the SEC’s dim view of many token projects was becoming increasingly clear), customer service (there was a backlog of 185,000 open customer service tickets) and compliance (such as conducting know-your-customer [KYC] checks).

It was all too much to handle, and the exchange began talking to Circle about being acquired. Which was convenient, because as Neville told CoinDesk, “we had imagined much more of a broader marketplace for all kinds of assets that can be tokenized,” though they “didn’t necessarily decide to build that right away, in 2016 or 2017.”

Following the Poloniex acquisition, Circle has such a marketplace. And while the company has work to do to rehabilitate the exchange’s image, Allaire says they’ve made progress: open customer support tickets are down to 2,000, KYC checks are in place, a number of tokens have been delisted, and regulators are reportedly less keen on pursuing Poloniex for potential violations of securities law.

Another opportunity presented itself in the form of the ICO boom, which served as a sort of proof-of-concept for a form of crowdfunding Allaire and Neville are now planning to offer: sales of securities – such as debt and equity – to retail (that is, non-wealthy) investors.

The issue, of course, is that unless they register with regulators and comply with burdensome disclosure rules, companies are not allowed to issue securities to retail investors – only to “accredited” (read, “rich”) ones. That’s the crux of many token issuers’ current predicament: they may have broken the law by conducting unregistered securities offerings.

There’s a relatively obscure exception to those rules, however, which was passed as part of the 2012 JOBS Act but not implemented until 2015. It allows companies to raise limited amounts of capital from ordinary investors, providing an avenue to conduct what amount to compliant ICOs. 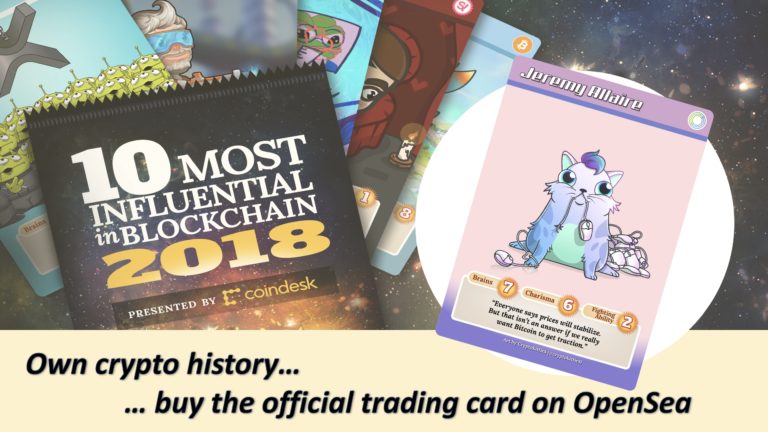 Yes, you can actually buy this crypto card and own it forever.

“It’s slightly different from … crowdfunding, slightly different from something like token sales that we saw last year – it’s a maturation of both in a new direction,” said Neville. To provide a platform for these security token offerings, Circle has signed a deal to acquire SeedInvest, a platform built around the Jobs Act exemption that already – as an “alternative trading system” – has the necessary regulatory approvals.

“Businesses can issue these digital tokens that may, in fact, be securities, and that’s OK,” Allaire said. “It’s not like a scary thing. A security is just a way to ensure that investors have some protections.”

Finally, the grinding saga of Tether – a wobbly “stablecoin” with nearly $2 billion in outstanding issuance – proved two things: that crypto traders want fiat-linked blockchain tokens, and that their go-to left much to be desired.

USDC (what eventually came of the “Spark” initiative) is Circle’s answer to that demand, and the coin has also been adopted by Coinbase as its stablecoin of choice.

A year ago, Circle’s product suite was an odd, barbell-shaped contrivance. The company had, as Neville put it, “Circle Pay at the extreme consumer end of the spectrum – people using crypto and they don’t even know they’re using crypto.”

At the other end, the company had “this sort of high-touch, high-value trading system, OTC that enabled that thing to work.”

To fill the “big gap” in the middle, the company created a retail investment product not unlike Coinbase’s. But the rollout of USDC and the acquisitions of Poloniex and SeedInvest do more than fill out a lopsided product offering. They point to a lofty ambition to create “a radically more open, global and inclusive financial world,” as Allaire put it. 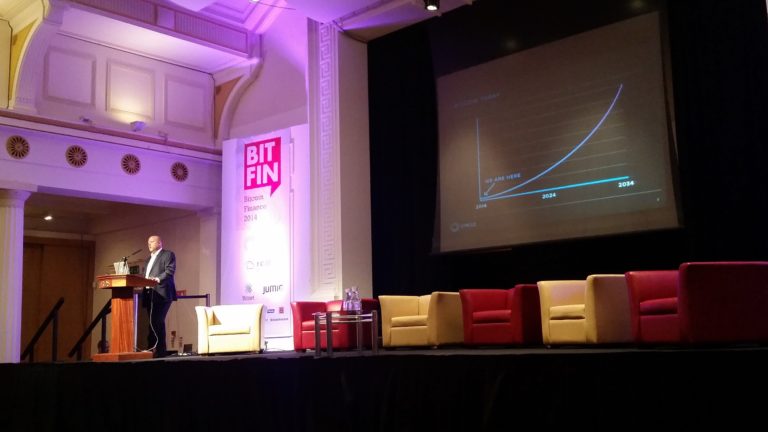 Allaire kicks off day one at the BitFin conference in July 2014.

In a world of tokenized – well, everything – Allaire said, “an individual in one part of the world can not just send and receive value, but can enter into economic arrangements with other individuals over the internet without an intermediary.”

People could tokenize not just debts and equities and claim on cash flow, but contractual relationships – “all mediated by code on blockchains over the internet.”

“The level of economic integration that becomes possible on a global basis,” Allaire said, “is just staggering. And so for us, we’re just excited to create the platforms and markets and tools to let people take advantage of that.”

That “tokenization” has so far enabled little more than the creation of probably-immutable, probably-non-confiscatable cat-themed collectibles – is beside the point. “It’s sort of like in the early 90s saying, here’s all the websites that are out there, this is it, we’re done, the web’s done,” Allaire said.

Circle has capital, live products, experience and ambition – none of which guarantees success. But even if tokenizing the world falls flat, the company has proven the ability to survive a bad bet in the past, and go on to thrive.

Facilitating the adoption bitcoin – or whatevercoin – for day-to-day purchases will be some other firm’s coup if anyone ever manages it. Circle, for its part, has moved on.

Photos by David Floyd for CoinDesk