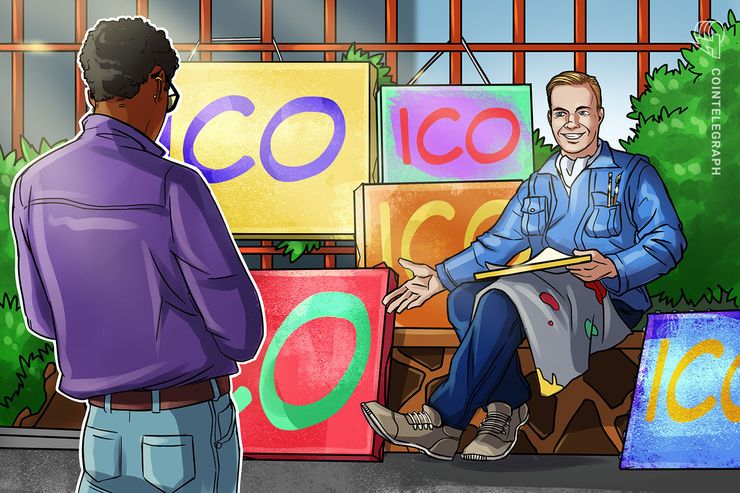 The bear market has not been easy on the crypto market, especially when it comes to initial coin offerings (ICOs). The demand for small-value tokens issued by relatively unknown projects — some of which eventually might or might not turn out to be viable investments — has been dying out, and the days of “to the moon” meme seem to be well behind.

Now, people who jumped on the ICO bandwagon a bit too late are looking for a way out. Enter Ivan Komar, the 21-year-old owner of a startup called “Sponsy,” who is trying to sell his project on eBay for $60,000 after failing to gain the interest of the public in his tokens.

“There was one person who bought some tokens for $10, so it can’t be counted as an ICO”: Sponsy’s brief history of failure

Komar started his project at the end of 2017, as he told Cointelegraph over Skype. The idea was drawn from experience: Komar was organizing a hackathon for software developers in his hometown of Minsk, Belarus at the age of 19 and faced difficulties while trying to raise sponsorship funding for some of his earlier business ventures there. He said:

“It required me to approach each single sponsor directly and communicate with them one by one, which took much time and energy. Actually, a really small proportion of the sponsors that I approached were willing to sponsor our event. So I had an idea to create a platform which would make it as easy as possible to organize sponsorship deals.”

Thus, Komar decided to develop a platform that would facilitate sponsorship transactions and make them transparent.

“We worked hard on developing tech, and we also had an idea to run a token sale to raise some money funding to facilitate and accelerate some software development efforts. However, we did not manage to raise a single dollar. That’s why I don’t think that our product will be ever completed.”

Despite being advertised as a “blockchain project,” the platform’s core component is actually centralized. “It works with a typical centralized server,” Komar revealed during the conversation. “But we have some components which work on blockchain, and it would be easy for us to create some interpretability between the blockchain part and centralized part. It exists both in centralized and decentralized worlds.” The Sponsy founder also told Cointelegraph that they developed some smart contracts on the Ethereum (ETH) blockchain.

As Komar explained it previously to the Financial Times, his company missed the ICO boom of 2017, and no one became interested in its tokens later in 2018. The reason why they were so late, the young entrepreneur said, was his lawyer, who advised him to develop the actual product before launching an ICO — a decision Komar now seems to regret:

“We would not have tried to build a product first, we would have tried to run a token sale as soon as possible, to jump into this crypto craze bandwagon and raise as much money as possible before building any product. And that’s exactly what others were doing.”

While speaking to Cointelegraph, Komar described his lawyer as “a reputable guy” with many clients:

“I mean, at least none of his clients got into jail, so that’s a good lawyer.”

Despite the legal advise, Komar actually attempted to hold an ICO at the start of 2018. According to the token sale website that he actively promoted in Sponsy’s Telegram groups, SPONS tokens (basic ERC-20 tokens with no utility use) were being sold for $0.085 each during a private sale that started on Jan. 28 and ended on April 7. Since then, the tokens have been sold for $0.10 as part of the so-called presale, which is set to expire on May 1, 2019, according to the website.

Komar confirmed that he attempted to sell tokens, but didn’t agree that it could be classified as a token sale:

“There was one person who bought some tokens for $10, so it can’t be counted as an ICO.”

He added that he failed to sell more mostly because of advertising-related difficulties:

“We tried contacting a couple of media outlets to spread the word about our project, but nobody was interested to write about yet another ICO, because so many ICOs were failing. Those who agreed offered an insanely high price for press coverage.”

Andrew Hinkes, co-founder of Athena Blockchain and an adjunct professor at the NYU Stern School of Business and NYU School of Law, told Cointelegraph that a substantial amount of “2016-2018 vintage ICOs” were mostly offerings without compliance with securities laws and are therefore not viable in the United States, where sales of investment products are regulated by the state.

There are other inconsistencies with Komar’s project. While there is indeed an iOS app available for downloading on the App Store, it appears to be quite undeveloped. Specifically, under the “sponsors” tab, there are just three companies, two of which are Adidas and Coca-Cola.

When asked whether Sponsy has signed any documents with the commercial giants, Komar replied negatively:

“No, we haven’t signed any legal partnerships with those companies. And the fact that you see those sponsors on the app is mainly because it was some sort of a test. Those Adidas and Bosch have nothing to do with real Adidas and Bosch.”

Further, Sponsy’s website claims that the startup has visited various blockchain conferences, but the titles of those events don’t match up with their logos. Specifically, Sponsy claims to have attended San Francisco Blockchain Week, which is listed under the logo for BlockShow, a separate event powered by Cointelegraph. However, the BlockShow attendees’ database shows no record of either Ivan Komar or Sponsy. Googling the title “Sponsy” along with other events listed on the startup’s website shows no relevant results.

During the interview with Cointelegraph Komar, claimed that Sponsy did a roadshow “across San Paulo, Singapore and Hong Kong.” The entrepreneur also complained that he was promised meetings with “top-notch investors” there, but those turned out to be “randomly selected people who had nothing to do with investment.”

Further, the project claims to have a “solid social presence,” with over 10,000 likes on Facebook and 8,000 subscribers on Twitter. However, the Twitter page has only been updated twice a month since the company announced its forthcoming token sale last December, and the posts have around 10 likes on average. Sponsy has similarly maintained accounts on other social media, with posts randomly commented on by bot-like users, most of which describe how profitable and successful the project seems to be. Komar claimed that those are “totally real people.”

“They come from a program called ‘bounty program.’ It’s very common among crypto startups. They are designed to spread the word about the project through those people who are commenting, liking, tweeting and stuff. But they [the participants] have no fantasy. I mean, they have poor English, mostly because they are based in Indonesia, Philippines and other poor Asian countries, and all they can do is write the same messages which do not make sense.”

Those people receive compensation for their efforts in the form of SPONS tokens, Komar clarified, adding:

“But they are not going to make any real cash out of it, because we are selling our project. We did not manage to sell enough tokens or get on any crypto exchange. So, we can sympathize to [sic] those guys.”

When asked whether he felt responsible for that, the Sponsy founder said:

“No, because either way they wouldn’t have made cash out of it. It could be like one-two-three dollars, not any substantial amount of money. Even for Indonesia.”

Finally, Sponsy is described as a blockchain project that could launch both ICO and a security token offering (STO). The author of the offer claims that the project was audited by a United Kingdom-based law firm. The Financial Times reported that Komar was actually referring to a Poland-based company called Memorandum Capital, which claims to have its head office in Manchester. However, 132 other companies are listed at that address, according to Companies House Data, the publication established. A Google Maps search reveals that the firm’s office is actually a residential house with satellite television.

Moreover, the eBay listing states that the solutions developed by Sponsy comply with European Union and U.S. regulations.

Komar told Cointelegraph that his startup had received all the documents required for holding a token sale from the same lawyer who advised him not to run an ICO before having developed any actual product. Launching an STO for his project, in turn, would require additional funding and documents, he said:

“We decided to abandon those plans. But we believe that some person out there might be interested in this. That’s why we wrote about the fact that the buyer could run an ICO or STO with our project.”

Andrew Hinkes informed Cointelegraph that, while a product or service can comply with a law that governs it without a piece of paper as evidence, there are complex regulatory issues surrounding fundraising, crypto and advertising:

“Of course, if a seller is making a false claim to induce a sale, there may be civil or criminal penalties associated with those claims. Potential investors should always conduct diligence on any investment opportunity prior to making an investment.”

“I still expect that we will be able to negotiate the price”: Will Komar actually sell his business on eBay?

Somewhat ironically, Komar has finally got what he wanted: the public’s attention. “I Googled about other crypto startups selling on eBay and I realized that there was no competition in this regard,” the entrepreneur said. “I thought that this could potentially attract the attention of journalists and the media worldwide. And that’s what seemingly happened.”

Since the Financial Times ran a story about Sponsy, 47 people have followed its eBay listing. More importantly, Komar has been approached by seven people, he told Cointelegraph. While no one has offered to pay the full price, someone is apparently willing to pay as much as $50,000 for the startup. “I still expect that we will be able to negotiate the price to get it as close to $60,000 as possible,” the 21-year-old said. When asked about how much he spent on the startup so far, he replied after a short pause:

Sponsy’s case seems to illustrate the critical condition of the ICO market. Indeed, just during Q3 2018 — from July to September 2018 — ICO funding overall fell by a whopping 48 percent, according to a study from ICO analysis firm ICORating.

Komar said that he doesn’t believe in ICOs anymore. The market has been corrupted by bad actors, he added, clarifying:

“[ICOs were spoiled] by people who were raising millions of dollars and disappeared. The only words they left on their website was ‘penis.’ Those kind of organizers spoiled the whole scene and no one believes in ICOs anymore. Actually, ICOs were mostly interesting to retail investors who were spending their money on buying tokens and losing that money, obviously. I think that the ICO mechanism is dead mostly because of scams and fraud.”

While selling a startup via eBay might appear rather peculiar, it can be legal. “Generally, a person can sell their property, including a business that they may own,” Hinkes told Cointelegraph. “While eBay maintains a list of restricted goods that cannot be sold on its platform, it appears that there are specific areas on eBay’s website designed for the sale of businesses; and Sponsy is listed on a page that appears to allow the sale of web pages and internet companies.”

However, Hinkes added, most sales of businesses are complicated transactions that can’t be performed without lawyers’ involvement:

“A sales transaction typically includes contracts that identify assets being sold including inventory, IP, existing commercial relationships, operations, customers, etc, will carve out certain assets not sold, and will include warranties, representations and disclaimers about the sale. For this reason, sales of businesses are typically conducted in consultation with lawyers. It is unlikely that the sale can be fully affected over eBay without other legal documents being executed by the buyer and seller.”